It’s time! The first of the year marks the first post ever for E’s Anime Reviews! Let’s get started! 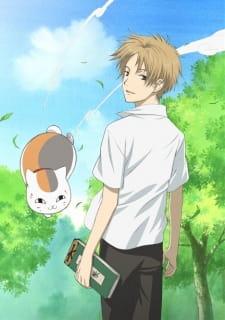 Natsume Yuujinchou is a shoujo/slice of life/supernatural anime found on Crunchy Roll. I chose this as my first review because it’s one of my favorites.

For as long as he can remember, Takashi Natsume has had the ability to see youkai (spirits), a power inherited from his grandmother Reiko. Upon her death, Reiko bequeaths to her grandson her Book of Friends, a book containing the names of spirits Reiko had bullied into servitude.

Takashi’s parents died when he was very young, and he spent much of his childhood being passed around by family, never really belonging anywhere because of his ability. The Fujiwaras are the latest to take him in, and this is where Takashi finds the Book of Friends.

The Book of Friends is a highly prized item in the spirit world, and youkai haunt Takashi constantly. Whereas Reiko formed the contracts, however, Takashi spends his time dissolving the contracts and releasing the various youkai that come to him for help. Not every youkai he encounters is friendly… or weak.

While running away from one such youkai, Takashi accidentally releases a demon cat from imprisonment in a shrine. The demon cat, Madara (or Nyanko-sensei, as Takashi calls him) can change his shape from a monstrous, flaming hellbeast, to a squishy little manekineko-like furball. Madara serves as Natsume’s bodyguard and spiritual advisor of sorts, even though he is motivated by his own desire to possess the Book of Friends.

The series follows Takashi and Madara as youkai seek them out to remove their names from the Book of Friends, and Takashi makes some lasting friends of his own.

So there are a lot of things about this series to like.  Natsume is visually stunning. There is a soft look to the animation, with thin outlines and almost pastel colouring. The characters, both human and youkai, are well designed and have lots of individuality.

The story in Natsume is very easy to get drawn into. The characters and even (some of) the youkai are likable and deep. Youkai can be fun or creepy, some are downright evil. Overall, one of the best series I’ve watched.

The only complaint I could have is that Takashi tends to put himself in danger because he doesn’t want to bother his parents or friends, which can sometimes be really infuriating. I have a tendency to yell at the screen when people in TV shows or movies do stuff like that. “You idiot, you’re going to get yourself killed! And now you’ve been captured. I hope you’re proud of yourself. Moron.”

Erica is a 26 year old geek living with her fianceé. In between watching Doctor Who and building Lord of the Rings LEGO® sets, she spends her time watching anime. She is the author of the mini blog E’S ANIME REVIEWS.
View all posts by Erica →

Erica is a 25 year old geek living with her fianceé. In between watching Doctor Who and building Lord of the Rings LEGO® sets, she spends her time watching anime.

Get updates from E's Anime Reviews!