Mickey Ears of Holding: You Shouldn’t Have Skipped That

There are a lot of AWESOME things at both Disney World and Disneyland, and some of those things can be easily disregarded as skip-able, or things visitors never know about. Here is my list of the top things you should NOT skip during your visit! 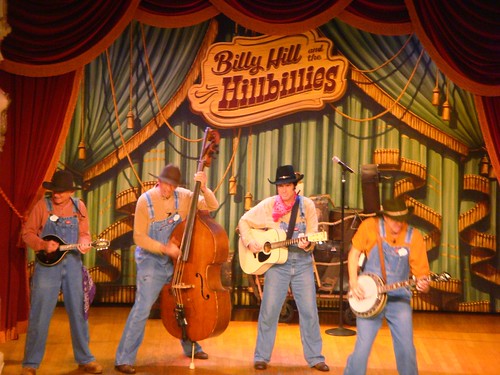 Off Kilter and Billy Hill and the Hillbillies – One is at EPCOT at Disney World and the other performs at Disneyland but both are shows you shouldn’t miss! When visiting Canada at EPCOT plan out your day to hit one of the Off Kilter shows which feature rock music, bag pipes, and guys in kilts!  Billy Hill and the Hillbillies play in Frontierland at Disneyland and are a rootin’ tootin’ foot stompin’ hilarious good time.  The Billy Hillybilly show is very interactive and great for both adults and kids. Off Kilter isn’t very interactive, but has some great tunes – their music is great. So great, in fact, that I have bought their CDs (which are available in one of the EPCOT stores).

California Adventure Animation Building – The Animation building at Disney’s California Adventure has got to be one of my top locations at the Disneyland Resorts to visit.  The courtyard inside is STUNNING and a great place to sit and rest while being surrounded by an amazing tribute to the animated Disney and Pixar films.  The visuals and music are really amazing; really really!  There is a small side room that showcases recent animated film releases, one specific movie (including concept drawings), and has a large Zoetrope. I included a video of the Zoetrope in action below (as well as a video of the courtyard). Also inside the Animation Building is Turtle Talk with Crush (check out a video here!), which is a great (and fairly new) attraction and not one to miss.  There is a “class” type offerings in the building under ‘Animation Academy’. I’ll be honest and let you know that I haven’t done it.  The Sorcerer’s Workshop features interactive exhibits that are alright, but not great. Again, the real stand out is the lobby and the Zoetrope and both make it well worth the visit.

The Ghirardelli Soda Fountain and Chocolate Shop – First, let me say that I came upon this gem during my last trip to Disney World and visited three times in five days – THAT’S how yummy this place was! I would have gone daily if I could have! For a review, check out the Disney Food Blog.  I don’t know how better to sell this place other than: Ice Cream and Ghirardelli.  I may not be the hugest Ghirardelli chocolate fan, but they have an AWESOME butterscotch sundae and I really wish they would sell their butterscotch sauce somewhere (they had none in their store attached to the Fountain and none on their online store. Very sad.) Supposedly the Disneyland Resort has one now, yay!

A Day of Rest – It happens to the best of us…we get Disney’d Out. It’s that wall: money flying out the door, kids crying, lines, lots of walking, stress, fastpass schedules, did we remember exactly when that lunch reservation was for, I forgot the camera at the hotel, waiting for the bus, where is my ticket, the baby needs a nap, hungry, overtired, over excited, etc. etc. etc. All park goers have been there. That’s why you should include in your plans (especially for a Disney World vacation) a ‘rest day’ in the middle of your vacation.  Having that down time is such a relief.  Attempt not to plan anything on your rest day, except maybe dinner reservations. Your day off is a perfect day to make a dinner reservation for at one of the Disney Hotels (I suggest Ohana’s!).  Sleep in, check out the pool and sunbathe, play a leisurely round of mini-golf, catch a movie, wander slowly through Downtown Disney/Disney Disney District, and just enjoy a moment to ‘breathe!’

Disney Hotels – Whether you decide to stay on property or not, the Disney Hotels are Imagineering masterpieces.  Many are worth a walk through of the lobby and other areas, some are worth also visiting the pools, and some also have stellar restaurants.  Here are some of my favorites: The Grand Californian Hotel and Spa, Port Orleans Resort – French Quarter, Animal Kingdom Lodge, Polynesian Resort, The Grand Floridian, and The Wilderness Lodge.  The Wilderness Lodge is easily my favorite because I adore the decor and the Whispering Canyon Cafe is one of my favorite restaurants.  I am looking forward to checking out the new Animation Resort at Disney World next time I visit. (c) Down for Disney

Haunted Mansion Holiday – Disneyland is awesome. How awesome? So awesome it dedicates 3 months of the year to The Nightmare Before Christmas.  Very awesome!  Disneyland shuts down the regular Haunted Mansion for about two weeks and retrofits it with a Nightmare Before Christmas overlay/theme that runs from October until early January (to cover both Halloween and Christmas).  The decor in the stretch room changes, the line queue is updated with a new look, and even the soundtrack to the ride is different – all on top of the actual RIDE itself getting the temporary decor update. It is EXTREMELY awesome, especially if you are a fan of the movie.  I really wish Disney would expand this event into Disney World. Line Queues – I’ll be honest, I don’t like ride’s that have negative G’s on them – which pretty much knocks out every roller coaster. I won’t ride them. I don’t find them fun. I am that lady screaming as if she is dying of terror, not screaming out of exhilarating fun. That means I miss a chunk of what Disney has to offer, but it’s a price I am OK paying in return for missing out on a ride full of absolute panic and horror. But, I can say that Disney still lets me enjoy a small piece of their roller coasters through their line queues (and the People Mover, which I have discussed in a previous post). Especially for Disney World, where the Imagineers had Disneyland to use as a guinea pig as well as more development, time was spent designing engaging, beautiful, and sometimes interactive line queues. For example…. the Tower of Terror is never a ride I would even consider attempting, but their line queue is GREAT. Styled after the old Twilight Zone TV series, the ride and queue are done in a fun throwback horror design. Even if you don’t want to ride, you can always take the ‘wuss exit’ before EVERY ride’s actual vehicle loading. Here is what you would be missing if you didn’t go through the queue:

The Word on the Street:

I put up an informal poll/request asking my Facebook universe friends what their ‘do not skip’ Disney items were. Here is the rundown of their personal suggestions on things not to miss:

Rhianna is a 30 year old first time geek mom. She hopes to raise her daughter, Sierra, with a love of reading, science fiction, fantasy, computers, gaming, and a love of the outdoors. Rhianna likes a lot of different geek genres, but doesn’t consider herself a die-hard fan of any of them…more of a lover of most. She is the author of the mini-blog BAG OF HOLDING.
View all posts by Rhianna →

Rhianna is a 30 year old first time geek mom. She hopes to raise her daughter, Sierra, with a love of reading, science fiction, fantasy, computers, gaming, and a love of the outdoors. Rhianna likes a lot of different geek genres, but doesn’t consider herself a die-hard fan of any of them…more of a lover of most.

Get updates from Bag of Holding!

You are gathering your group for an epic quest through Middle Earth. There is room for one more in your group, it is mandatory that another member is chosen. Which do you choose?